ENGOs are calling on the Environment Minister to suspend building site excavation in view of the plight of... 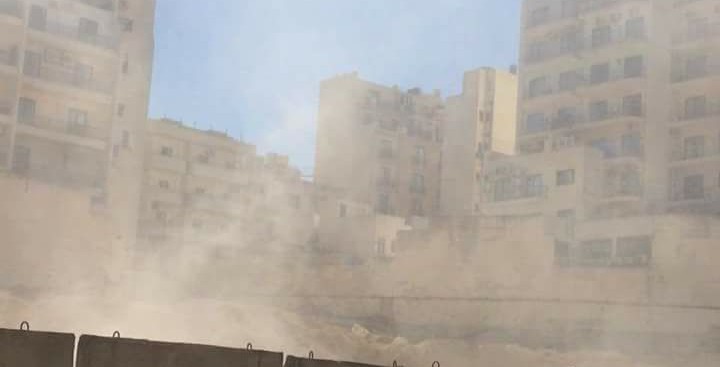 ENGOs are calling on the Environment Minister to suspend building site excavation in view of the plight of residents who are “not able to escape the unbearable noise and vibrations of nearby construction excavation.”

In a joint statement, eNGOs Flimkien ghal Ambjent Ahjar, Graffitti, Friends of the Earth (Malta), Ramblers Association, Isles of the Left, Malta Youth in Agriculture Foundation, the Noise Abatement Society Malta, Futur Ambjent Wiehed, NatureTrust (Malta) and BirdLife Malta, have joined with St Julian’s, Sliema, San Gwann, Swieqi and Gzira Mayors in calling for construction works to be limited to 8.30am – 1pm during the Coronavirus pandemic.

However the eNGOs also went further by calling for a total suspension of all excavation during the Covid-19 crisis.

They stated that the noise emission levels caused by excavation work is between 95 and 110 decibels, when the World Health Organisation (WHO) warns that exposure to noise above 85 decibels is dangerous to human health. Medical studies show that excessive noise levels can cause hearing loss, stress and higher rates of diabetes.

“Constant noise causes blood vessels and muscles to contract, leading to a gradual loss of hearing, and possibly to heart disease and high blood pressure which can cause strokes,” the eNGOs added. Changes in the immune system and birth defects have been also attributed to noise exposure.*

Furthermore, they argued that excavation vibrations have caused “widespread structural damage to residents’ dwellings.” The eNGOs called for a change from the present excavation method to “Hydraulic Rock Splitting” technology.

This method, which the eNGOs said, is almost silent and does not cause vibration is used in Europe and other countries, “why are the authorities not insisting on its use in Malta?”

They went on to say that “besides aggression and other anti-social behaviour, exposure to intense levels of noise interferes with concentration, causes depression and anxiety – especially due to the very real worry of home collapses caused by excavations.”

According to the eNGOs, elderly residents in Malta are known to have “spiralled into dementia during extended periods of excavation drilling near their homes.”

The WHO stresses that, “Prolonged exposure to environmental noise can lead to reduced cognitive performance in children as well as severe annoyance and sleep disturbance.”

“It is a gross injustice that at a time when residents are facing such stressful times, they should be subjected to the mental torture of percussion drilling at 110 decibels for 8 hours a day,” they said.

Moreover, the ENGOs argued that elevated noise levels are linked to increased workplace accident rates which led Consultant Emergency Physician and Specialist in Emergency Medicine Jonathan Joslin, to call for all non-essential construction to cease immediately since “a large percentage of major trauma dealt with in the Emergency Department over the past year resulted from construction sites,” depriving hospitals of resources now needed for Covid-19 patients.

Besides noise pollution, the air pollution caused by construction is exacerbating pulmonary problems like asthma, and reduces immunity to disease. They stressed that this makes sufferers “more vulnerable to Covid-19, placing further strain on medical resources.”

The ENGOs pointed out that residents confined to their homes are being subjected to unbearable noise which they can’t escape, while children and the elderly cannot even relax in their gardens which are unbearably noisy or choked by dust from nearby developments.

Equally, residents are not able to open their windows due to the dust generated by construction sites, the eNGOs said.

“It is bad enough that developers have just been granted a three-year extension on permits. ENGOs and residents demand to know why construction is not being curtailed like other non-essential sectors,” they said.

They concluded by saying that “it is shocking that in order to protect this sacred cow, politicians are permitting developers to continue to inflict suffering on residents at this time of national crisis, hampering COVID-19 medical efforts.”

What you think about this story?
ENGOs call on Environment Minister to suspend building site excavation